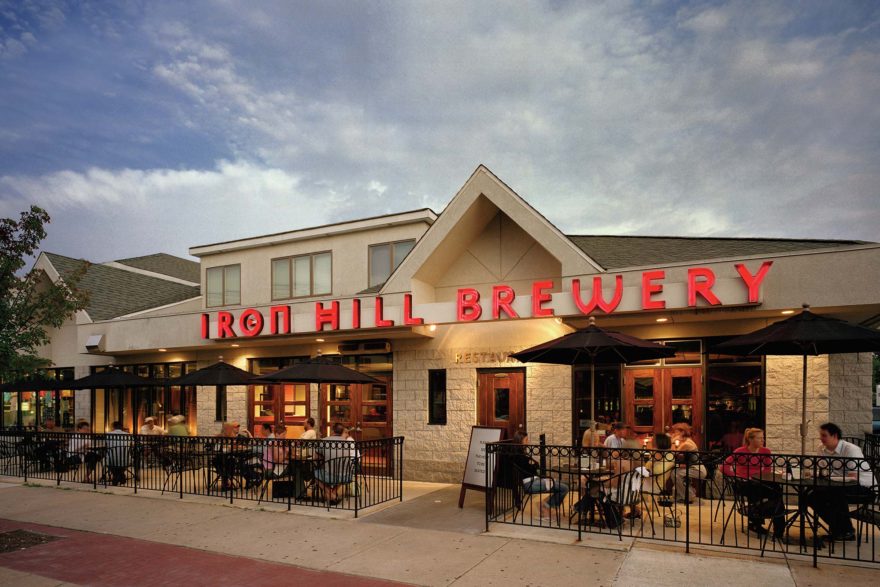 We’re making the perfect pair this Valentine’s Day weekend! Dinner for two, 3 courses or 4. Make your reservations today to enjoy these decadent meals from February 10-14.

2 Pizzas And A Growler

Can’t dine in with us tonight? Enjoy the next best thing and get 2 of our delicious pizzas paired with any signature growler for just $25. This offer is available for take out only.

Happy Hour, or as we like to call it, Hoppy Hour, is getting even better with our $3 fried chicken sandwiches. Plus enjoy delicious sliders and flatbreads. We didn’t forget about the beer, grab a standard pour of any beer and get $2 off! Available weekdays from 4-6pm.

Upcoming Events at Our Brewery

Come celebrate beer, food, and the blending of the two with us! We’re always adding new events, so keep checking back. Don’t miss out on the pints, bites, and fun.

While we're serving up the next round of events, check out our promotions.

King of The Hill Rewards

Earn points on food purchases (that turn into sweet rewards), drink from exclusive member only 22oz mugs for the price of a pint and receive additional perks and special offers all year long.

We always want you to come and hang with us, but we understand when you want to just kick back in your own house. That’s why we bring the party to you with our catering and events offerings. Offering everything from mix and match eggrolls, to sandwiches, entrees and desserts, we’re always ready to feed a crowd. And don’t forget the beer! Cans, Growlers and Crowlers available to purchase as well!

When you’re ready to party with your friends and family, look no further than your local Iron Hill. We offer private dining rooms, catering packages and more to help you be the host with the most. Call us today to book a private event at your local Iron Hill!

Community is important to us, and we are always looking for ways to give back to our neighbors and friends. Invite Iron Hill to host a fundraiser, offer gift donations, and promote gifting to your organization from our guests. Contact your local Iron Hill today to see how we can best partner with your organization.
Learn More

We’re not in this business for the glory; we’re in it because we love great beer and great food. Still, it’s nice when you get recognition for your hard work from experts in the field and the customers we’re proud to serve.
Awards
Order now
Reserve a table
Russian Imperial Stout

A rich, full-bodied stout, this style of beer was originally created to survive the long voyages from England, across the Baltic Sea, to the Russian Imperial Courts. Our version, with strong notes of dark chocolate and espresso, is brewed with that same regal spirit – worthy enough for a tsar, and, more importantly, you.

This pineapple-infused IPA starts off with a wave of tropical sweetness, but beware the bite there are aggressive hops lurking in the depths of this beer!

On November 14th, 1996 Iron Hill Brewery officially poured its first beer. Among the opening beer lineup was our classic porter, Pig Iron Porter. We’ve paid homage to this long standing Iron Hill staple by aging it on Rye Whiskey Barrels and upping the flavor and alcohol.

Sixteen ounce can of our American IPA using the Citra hop, which imparts a distinct tropical citrus aroma to this medium-bodied IPA.

Hazy, crazy and totally groovy baby. It’s time for Dankonia: a juicy New England-style IPA. It’s a whole vibe of intense pineapple and tropical fruit notes-plus a big ol’ batch of dry hops. Looks like we brewed up a boogie wonderland of pure easy sipping enjoyment. Can you dig it, baby? Of course you can.

All flavor, no pulp. Brewed using real oranges, this hop-forward IPA tastes like it came straight from the grove. It’s as refreshing and juicy as it is big and bold. Technically it’s a West Coast IPA, but we think it drinks more like a cold glass of fresh squeezed OJ.

This hazy, New England style IPAs been crafted by our finest, tight-pants wearing brewers. It’s a blend of wheat and oats, unironically dry hopped with All American hops. Notes of melon, mango and pine lead to flavor so cool it’ll curl your mustache.

Brewed with more than twice the usual hops, this Double IPA is a hop hero of sorts. First, you’ll taste notes of citrus, tropical fruit, and pine. Then, that craveable bitterness swoops in. So strong, so powerful, this beer might just be your, well, let’s just say weakness.

Refreshing, golden and a little hazy. Those words depict the perfect summer day just as well as they describe this deliciously drinkable Summer ale. Brewed with grains of paradise and lemongrass, this beer strikes the perfect balance between wheaty warmth and spicy hops, the kind of balance you’d need to surf the waves of a tropical paradise.

Hooray for Summer and especially for this hazy, juicy, and creamy double dry-hopped Milkshake IPA. Brewed with lactose and finished with blood orange puree for a craft beer that tastes just like your favorite ice cream treat.

Level up with our insanely drinkable passionfruit orange guava (POG) combination. The tropical fruit flavors and a touch of tartness make this beer a true champ.

This hazy beer may be considered a New England IPA, but its inspiration is pure Philly. Brewed with flaked oats and wheat, this beer features tropical fruit and resinous pine notes almost as intense as your passion for the home team. Whether you’re cracking one open at a tailgate or in your living room, you can just taste the brotherly love.

Brewed with whole leaf hops and far out vibes, this beer is a happening of peace, love, and flavor. Take in its earthy hops. Tune into the subtle undertones of grapefruit, pine, and tropical fruit that keep things grooving. Dust off those lava lamps, drop the needle on some vintage vinyl, and just let the experience of this beer roll over you, man.

This hazy beer may be considered a New England IPA, but its inspiration is pure Philly. Brewed with flaked oats and wheat, this beer features tropical fruit and resinous pine notes almost as intense as your passion for the home team.

You won’t be able to resist the imperial forces at work in this mouthwatering New England IPA. It overflows with notes of pineapple, mango and citrus from American hops, making it a rebellious force to be reckoned with.

Light-bodied and refreshing Farmhouse Ale with citrus fruit flavors and a burst of raspberry.

Light-bodied and refreshing Farmhouse Ale with citrus fruit flavors and a burst of raspberry. FPO

Light-bodied and refreshing Farmhouse Ale with citrus fruit flavors and a burst of raspberry. FPO